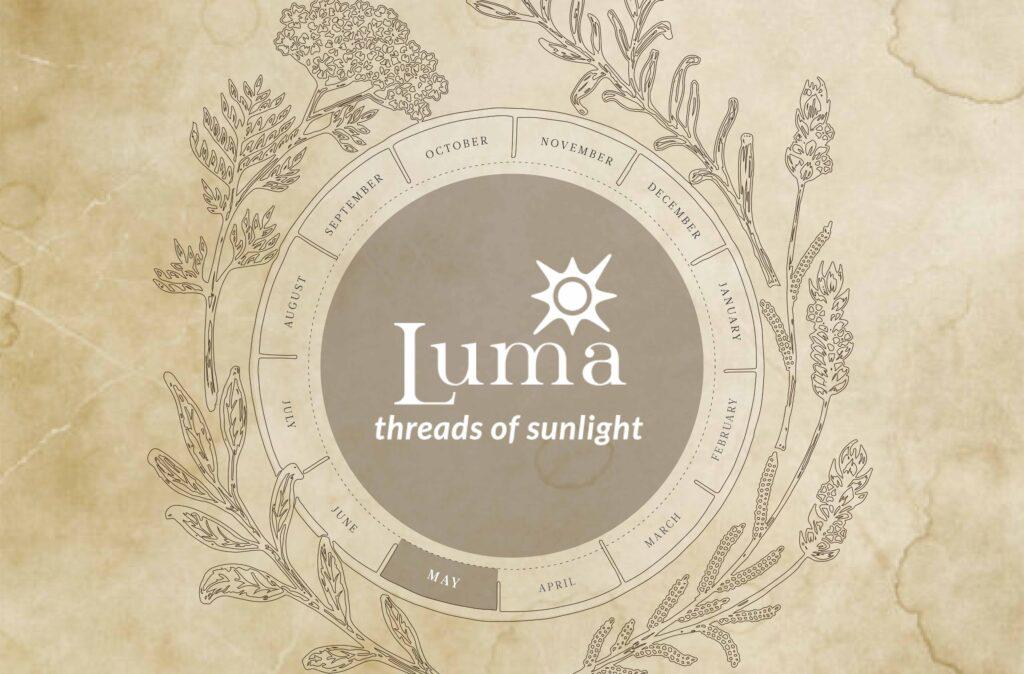 Yarn of the Month – Luma

A classic DK-weight yarn, Luma is inspired by the mood and light found in sun-bathed savannas. The plant-based fibres of organic cotton and linen are mixed with silk and fine Merino wool to provide warmth when it is cool, yet be light enough for warmer climates, a perfect yarn to create layering pieces of a handmade wardrobe.

Like so many of The Fibre Co. yarns, Luma had an ancestor in the very first yarns Daphne created. At the mini-mill in Maine, in the early days of The Fibre Co., Daphne experimented with carding different fibres together just to see what would happen. She found an interesting naturally brown coloured cotton that she was keen to experiment with, initially mixing the fibre with soy and linen. As is often the case with experimentation, the first attempts were not successful—the carding machine just couldn’t handle the plant-based blend. A yarn was born when Daphne added Merino wool, to provide a more flexible and lofty element to the mix. The yarn reminded Daphne of her years of living in Africa and she paid homage to the landscape by naming the new yarn Savannah.

When The Fibre Co. outgrew the mini-mill and Daphne was no longer able to create all the yarns with her own hands, Savannah had to be retired because the blend was too difficult to reproduce with the machinery at The Fibre Co.’s partner mills.

Daphne never lost the urge to include a plant-based yarn that would work well for warmer climates and continued to attempt to find a blend that the partner mills could produce. Some years and many tries later, Daphne found a mill that could spin a similar blend of fibres to Savannah with some differences; soy was replaced with natural silk, and the brown cotton was replaced with Peruvian organic Pima cotton. The blend had become something new and needed a new name—something that reflected the inspiration and the blend itself: Luma. The reference to light embodied in the name Luma perfectly sums up the history and the reality of this beautiful yarn.

The combination of fibres in Luma create a unique blend that makes it a great yarn for all-year-round knits, but it also creates a unique base for dyes. Each fibre in Luma takes dye a different way, and this results in subtle tones playing in each hank. A wide range of shades has been achieved, from deeply saturated to subtlety muted shades.

We have added eight new shades to Luma this year: Carnation, Iris, St Tropez and Marigold are popular colours this season and have been seen on many runways and designer collections. Garments made in these shades will have a trendy modern look even in a classic pattern. Brinjal, Straw, Vinca and Sap Green provide more classic earthy tones for the more subtle knitter the create timeless looks. 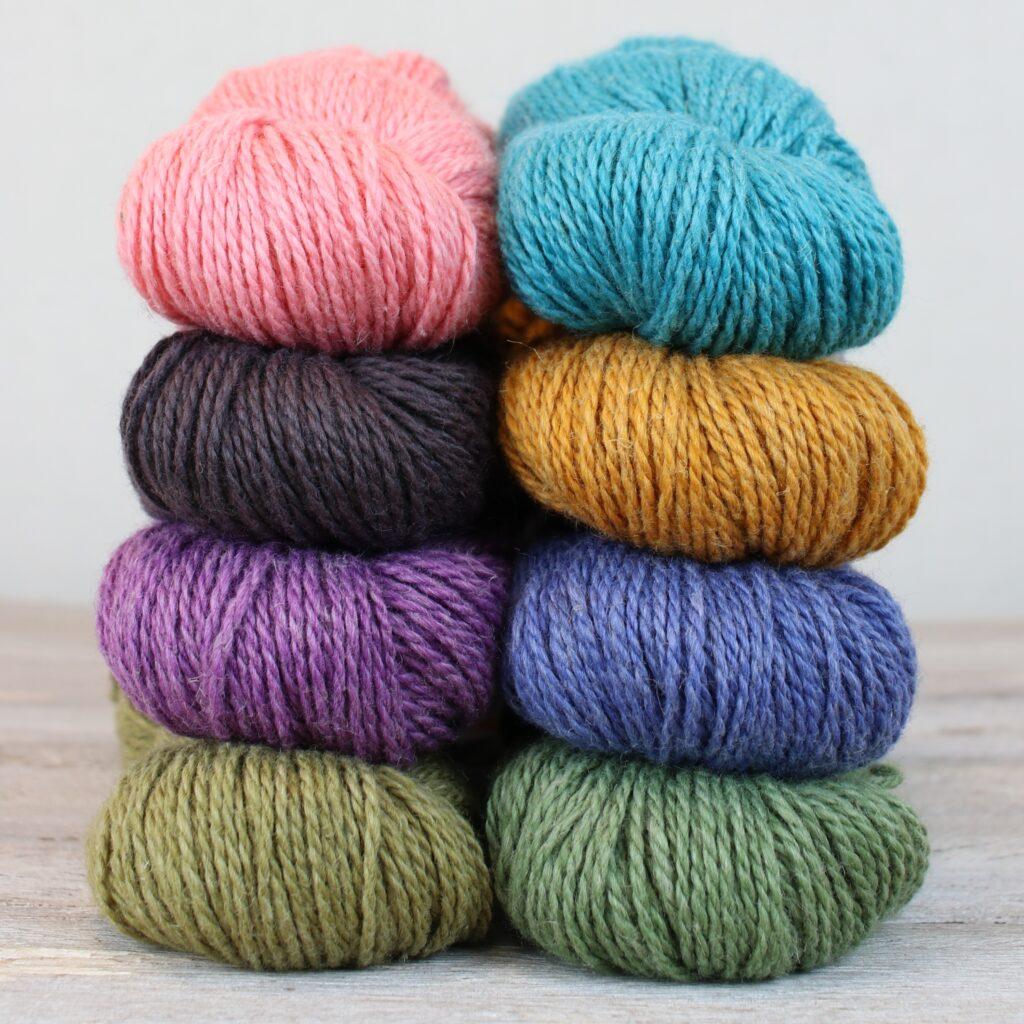 The  unique blend of Luma is great for daily wear all year round: an extra layer in the cooler months, with the cooling fibres of cotton and linen coming into their own during the warmer months.

These diverse characteristics are reflected in the diversity of patterns designed for Luma from light and elegant shawls such as the Eyelet Shawl.

Worked in one piece from the top down this shawl is the perfect introduction to shawl knitting. It works up quickly and easily in the Luma, with the beautiful blend creating a delightfully warm piece that can be easily worn across the seasons. This project walks you through a dedicated shawl cast on, the garter tab, and introduces you to simple eyelets and the joy of blocking to finish your shawl.

Designed by Dora Creadora, this simple summer tee draws inspiration from sailing ropes. The construction ensures a flattering fit at the neckline, which is the focal point of the garment. The simplicity of the design and the timeless stripes make it easy to wear and combine with other wardrobe staples like high-waisted trousers, skirts or over dresses.

Our pattern from The Almanac Series for Luma is Ginseng, a V-neck tank top designed by Sarah Hatton. Packed with intricate details along the neck and side seams and with a 1×1 rib section at the top of the body, Ginseng comes with 2 length options – a shorter version or a longer version with vents at the lower rib. An exposed three needle cast-off finishes it off nicely.

Based on the original farmer’s Almanac guide to the seasons, The Almanac Series acts as a seasonal guide to knitting with The Fibre Co. and celebrates each month of the year with an ascribed Yarn of the Month, paired with a new design launch in that yarn.

May is the turning point of spring into summer and is a month full of life. Luma is this is the month’s yarn because it is simply perfect for creating light layering pieces that people want in their wardrobes at this time of year. The plant-based fibres of organic cotton and linen are mixed with silk and fine Merino wool to provide warmth when it is cool yet be light enough for warmer climates.

If you have enjoyed knitting with Luma, please don’t forget to share it with us! Please use the #TheFibreCoLuma when you post about it on social media and tag us with @thefibrecompany on Instagram and @TheFibreCo on Facebook when you post so we can admire your beautiful projects!

More Kits From The Fibre Co. in Luma. 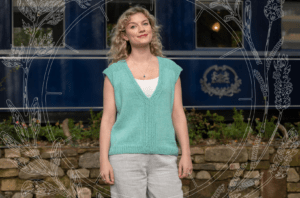 The knitted vest has long ago shed its image as being strictly for grandpas, but we are delighted to see that yet again the tank 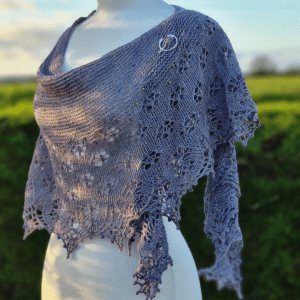 Shawl lovers will already know about Boo Knits.  With an extensive back catalogue of the most stunning intricate lace shawls as well as comforting, cold-weather 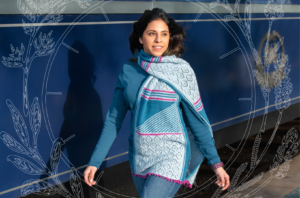 Amanda Jones on the Muse of Mullein